Guilty Pleasures: George of the Jungle

George of the Jungle started as a cartoon in the late sixties. It ran on some network all the time, and I watched it religiously. It was produced by the same people who did the Rocky and Bullwinkle show, and it's on the list of "Shit I'm Nostalgic for Even Though it Aired Before I was Born", alongside the Mission Impossible and Columbo TV shows. I'll have to make a list of these things one day.


Oh my god, y'all, I don't even know how to tell you how into this movie I was when I first saw it. This movie came out the year I turned 13, and I destroyed the VHS I watched it so much. To be clear on what I mean by this: we had a tape of the Princess Bride from the year it came out on VHS that Nick and I watched ALL THE TIME and it survived until we moved onto DVDs, but this one didn't. I had every line memorized, including the Swahili bits.


You see, this movie was the first time where I actually started to understand, well, sex. I mean, I understood it on an intellectual level to a very small extent (tab A, slot B, baby) and that people who love each other in romantic ways have sex. I had romantic feelings about boys from time to time, and I assumed that meant having sex with them at some point long down the road, but I had never really connected the "pure" romantic feelings I'd had with sex.

I think I had, until that point, bought into the 'good girls don't actually LIKE sex' idea. I don't know, but I'd never had that moment where I looked at a guy and went "Oh, yeah, break me off a piece of that," until George of the Jungle. Not even joking.

I can tell you the exact SCENE that happened in the movie, too. And it may surprise you that he wasn't naked OR shirtless during it (although his shirtlessness was the reason I watched the movie over and over and over...) Towards the middle of the movie, he's in San Fransisco with Ursula and she leaves him in her apartment while she goes and does... something. He leaves and starts exploring. Then he ends up playing bongos in a dance studio and that is the exact moment I discovered how hot he was. 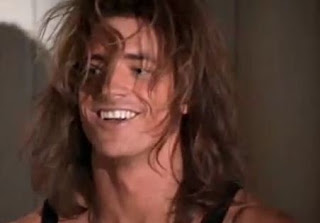 Look, I don't know. He spent most of the movie largely naked, and a tiny portion of it actually naked. Maybe it was the first genuine moment in the film (or the only)- the rest of the movie, Fraser is mugging and generally acting like an idiot. Which is in character for George, but this is a scene where it looks like the actor is genuinely having fun with the character while being the character. It doesn't matter, really. It was just the precise moment where I fell in lust with Brendan Fraser.

One of the subplots of the movie is about George discovering his sexuality and how to deal with it. That subplot is about as deep as a kiddie pool (and doesn't really go anywhere because she was falling for him anyway) but it was the thing I related to most in the movie: George awkwardly using gorilla pick-up moves on Ursula.

Look, I know the movie is bad. It's a mess of 'trying too hard' and not-very-good meta humor, with lots of breaking the fourth wall because they could. Fraser's ridiculous mugging and random monkey noises is really... well, it gets annoying. The material it's adapted from is not substantial to begin with, and the movie doesn't have anything new to bring to the table, nor does it update the concept in the slightest.

The movie hasn't aged well and feels very dated. George doesn't actually learn or grow in any way. He doesn't end the movie any smarter, or more sure of himself. There's a minute where they try to convince you that he doubts his worth, but it's not expanded upon and ends up going nowhere. Ursula has one moment where you think she might turn into a badass because she swings in on a vine and saves George. Then Lyle kidnaps her and she ends up hollering for George throughout the climax even though Ursula could clearly snap Lyle in half. The story of the movie is that they fall in love and, after some minor conveniences, get married. At one point, a character gets into an argument with the narrator of the story, and the whole movie stops while they bicker. The movie is full of pointless padding (the above scene with the bongos included) and the concept is stretched so thin you could read newsprint through it.

None of that matters. If it's on TV I stop everything and watch in anyway. I started watching for this so I could do some screen captures and I can't turn it off. I CANNOT STOP WATCHING THIS MOVIE. And I enjoy it and laugh at the jokes and look I don't know, stop judging me. I know it's bad. I don't love it because it's bad, this is not 'so bad it's good' for me. I really just have no excuses.

I do wonder if this wasn't meant to pander to the moms who would be watching this film with their kids. I mean, on top of all the mostly-nude, later in the film there's a scene where Brendan Fraser chases a horse with his shirt unbuttoned, and it's like the cover of a romance novel in motion.

There was a glut of Brendan Fraser movies to follow this one, including a cringeworthy adaptation of Dudley Do-Right, which I didn't even enjoy a little. I watched a lot of them. Blast from the Past, Bedazzled, and of course the Mummy movies, which will get their own post in the near future. Without a doubt, The Mummy was the best, and have no doubt that I love it. George of the Jungle was first and, therefore, will always have a piece of my heart. It's as embarrassing as it is true.

Posted by Bethany the Martian at 2:46 AM

Email ThisBlogThis!Share to TwitterShare to FacebookShare to Pinterest
Labels: Brendan Fraser, embarrassing but true, George of the Jungle, guilty pleasures